France to switch from Azerty to Bépo?

Several media have been reporting that France is considering to replace their current Azerty keyboard layout, which is lacking several characters for the French language (mainly ligatures æ and œ, and capitalized accented letters), either with an "improved" Azerty layout, or with Bépo, an ergonomic layout based on the same principles as Dvorak (like all vowels on one hand) but optimized for French.

What do we as the Colemak community think about this?  Is Bépo really the best choice for France, or does it suffer from the same or similar issues as Dvorak?  Would a (possibly modified version of) Colemak layout be a better fit for French?  I occasionally type some French in Colemak, and its multilingual AltGr mappings are sufficient for infrequent use (all ligatures and accented letters are available, also capitalized), but several accented letters are very frequent and may deserve a direct mapping, or secondary mappings could be better optimized for French?

DreymaR made a localized-Colemak proposal in his Locale Variants topic (mostly Colemak letters with Azerty number/symbol row?), and some older ideas were discussed here (unfortunately images are now missing).

Some drawbacks I can immediatly see with Bépo, without even considering letter or digram frequencies, is its "waste"(?) of keys for additional accented letters (although several are relatively common, é is 1,5%!), and the complete rearrangement of the number/symbol row, which will be hard to re-learn especially on existing Azerty-labeled keyboards.  It also requires an ISO keyboard, however those are ubiquitous in France.  But maybe an alternative secondary mapping for key 102 symbol "è" should be considered to fit ANSI keyboards as well (letter frequency 0,27%).

With several punctuation characters roughly in the middle, Bépo somewhat resembles a "wide" layout, but I don't think the home position is actually moved to accomodate this.  And again this comes at the cost of other punctuaction being moved to AltGr positions, notably /, \, [], {} and underscore.  Bépo claims to be a programmer-friendly layout though (which was not a concern for Dvorak at the time).

It is also "character complete" for several other European (Roman) languages like Spanish, Italian and Esperanto (through dead keys), but Colemak has this advantage as well.  And several accented letters are mostly French specific, so will be wasted keys for those other languages.

Bépo makes good use of the home row and is pretty well balanced, but did the designers consider digram/trigram frequencies and same finger issues as well? 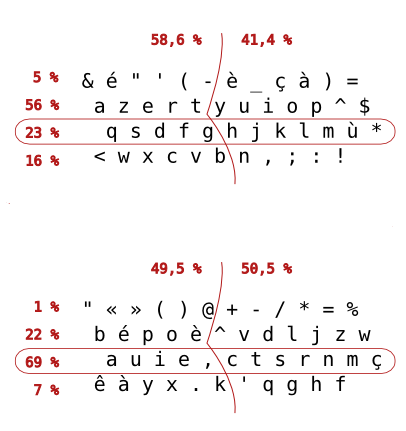 You are very wrong about my locale proposal! You were looking at the "Keep local symbols" variant, which some require. I quite strongly recommend the "Unified symbols" layout. Furthermore, it's harmonized for Belgium/France/Canada so it could be useful for many!

I know, it's a lot of text and you're tempted to skip directly to the nice images. ;-)

As you can see, my tack is to put the accent dead keys directly on layer 1 – the ¨^ one where the locals are already used to it, and the more important grave one right next to it! – apart from the very common Éé which deserves its own key. I'd also recommend using CurlAngleWide with it, to bring special keys to the middle and the very rare K to the middle trench.

In my Belgian/FrenchCanadian Colemak[eD] variant, letters like Œœ and Çç have to be accessed with the AltGr key but I think that's quite acceptable given their frequencies and the relatively easy access (in my opinion).

I don't remember Endaka's French Colemak all that well, but I think that my locale variant may just be better all in all. It has more advanced functionality, and to me it fits the bill.

Bépo seems nice to me, although of course I'd prefer a localized Colemak since that'd really turn the Colemak wheels faster! Also, my locale Colemak is easily transferrable to another language while this is very specifically geared towards French typing. Some French will like it for precisely that reason I guess, but it won't change anything for the rest of us as it'll be an isolated phenomenon in all likelihood; much like the Russian or Israeli layouts (but more ergonomic at least).

You'll need an ISO keyboard to type anything locale, pretty much. The ANSI keyboards have too few keys, sadly. One big advantage you get with that is that you can more easily use the Angle mod! :-)

An interesting feature is how Bépo almost has a Wide ergo mod built in! The very rare K and some punctuation gets moved into the middle. They don't seem to encourage a wide hand position with it though, so maybe it's just a freak coincidence. Without a wide position it seems silly?

Another nice thing with Bépo is its huge dead key lists. I've looked to them in my PKL files because they are so comprehensive (but then I added more, of course...!).

You are very wrong about my locale proposal! You were looking at the "Keep local symbols" variant, which some require. [...] I know, it's a lot of text and you're tempted to skip directly to the nice images. ;-)

Exactly, I just searched for "French" in your locale variants topic as I was sure you had a variant, and just looked at the full layout images there.  Sorry!

but it won't change anything for the rest of us as it'll be an isolated phenomenon in all likelihood; much like the Russian or Israeli layouts (but more ergonomic at least).

I'm not so sure about that...  If a nation with 65 million inhabitants and, unlike Russia and Israel, with a Latin-alphabet language, officially switches to a completely different, ergonomic keyboard layout, I think that would be a *very* significant event in keyboard land (much more than eg. Microsoft including Colemak in Windows).  It could make others, individuals if not nations, reconsider their stupid national layouts as well, perhaps especially the non-Qwerty ones (Azerty/Qwertz).  And then Bépo will probably lead many to look into Dvorak instead of Colemak...

Also, the layout jungle will only get worse if each country starts inventing their own language-specific layout.  Eg. if Italy would consider their own layout as well, it will not be Bépo based, given how specifically Bépo was designed for French.  Whereas one "pan-Roman language" layout with local variants (Colemak, of course) will probably give each of them 98% of the benefits, cost less in terms of standardization, and will be much easier for international users.

On the other hand, the more different "official" layouts are available, the more the world will "accept" using different layouts (eg. at workplaces), and the more people can and will actually think about which is best for them individually?

Yes, exactly. I would wish that something like my locale variants became common. With that principle, only a few keys have to change from locale to locale.

One "pan-Romance" layout is too much to expect I think, as it'll be not-quite-the-best for many languages – a jack of all trades but a master of none. What you need is a really good layout like Colemak and small adaptations to each locale like mine. That's my 5¢.

The ten most common letters in French are, in order, esaitnruol.  Q and u (and digraph "qu") are much more frequent than in English (with "ue" a common same-finger digraph), and h, w, g, y, f and b much less frequent.

Besides é (1,5%), other accented letters à, è, ê, ç, û, ... and digraph œ have a lower frequency combined than é alone, so indeed only é would really require its own (102nd?) key, without (re)moving a lot of other symbols for more accented letters like Bépo.

I don't think there are other trivial improvements.  The least-impacting change would be swapping H and L, as they are on the same finger (unless you consider Colemak L to be a better position than H of course).  U should perhaps move as well, but there's no obvious position it could take.  I thought about swapping it with W to make "qu" a roll, but it's not a very nice one, and makes for a very bad "qua" trigram (and a way too royal position for marginally used W).  So significant improvements would have to come from multiple key switches, which usually come with increased cost/benefit ratios compared to the standard Colemak layout.

Are there any native French users on this forum who have compared Colemak with Bépo?

Now, I do think that a pan-Romance layout with some configurable keys would be the way to go. Maybe Colemak is already it, maybe not. Colemak was made for English but is surprisingly (or not) good for many Romance languages. However, the "golden bullet" of layouts should probably be made with care for most European/American locales. Based on population or something. Note that the actual amount of English typing in the world is massive and that should be taken into account when creating such a layout! One would end up with a layout that's very good for English but not particularly bad for any of the other languages.

Then again, I think that Colemak is already that. For most other Romance languages, you'll need to switch at most two–three letters I believe (sometimes just an index-finger loop!), then add a few special/accented letters and you'll be good to go! ;-)