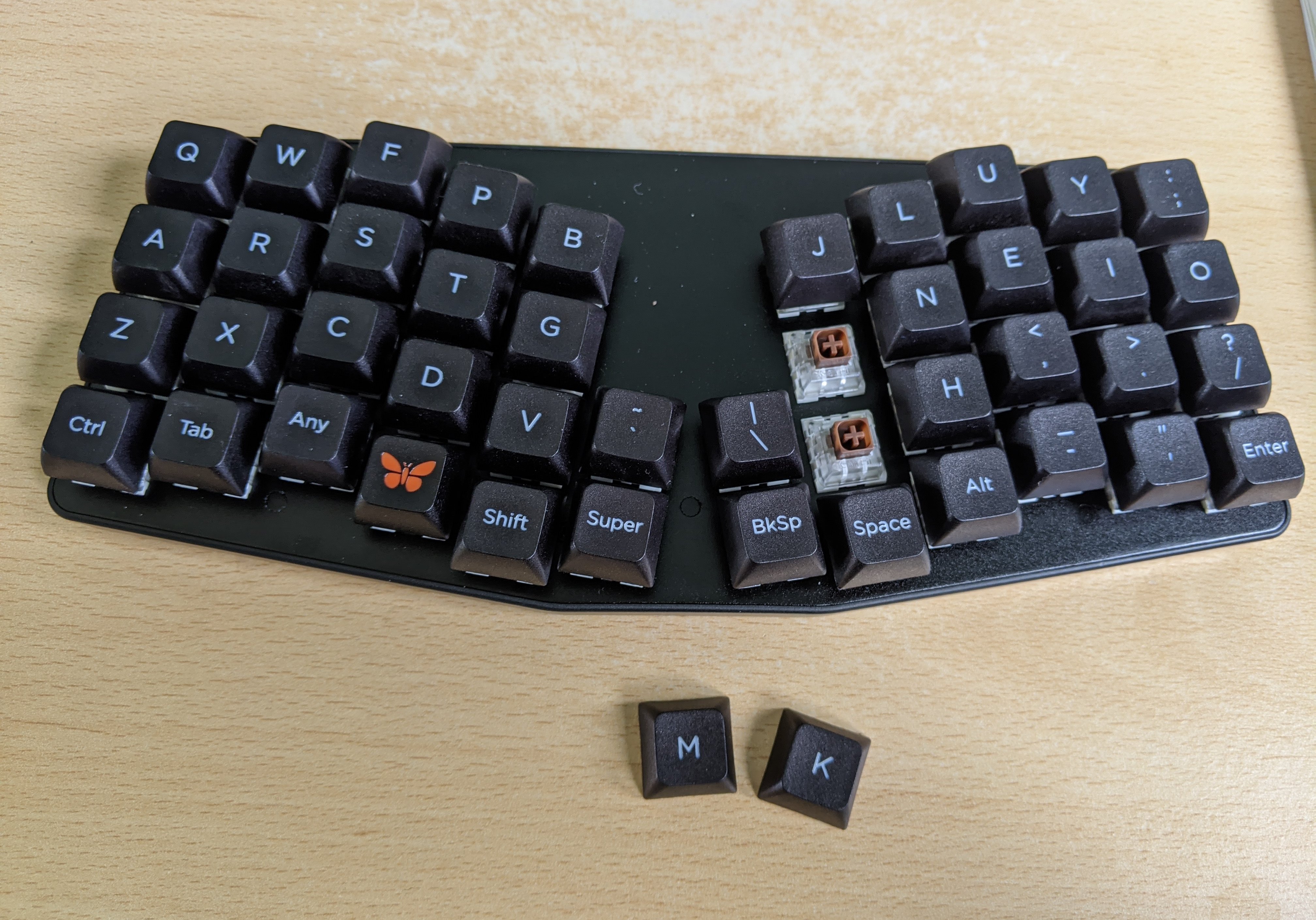 But what shall I do with those two keys?

My best guess is they go on the two unoccupied stems, Mmm-Kay?  ￣(=⌒ᆺ⌒=)￣

Give standard Colemak a try, it should work great with the Atreus

So, just an update on using my Atreus. I managed to resist the temptation of reverting to standard Colemak (lol)... but have decided to give DHm a try. Or more accurately, returning to DHm, since that's what I was using originally. My thinking regarding DH/DHm is basically this: On standard boards, DH may be marginally better, but on ortho boards, DHm seems substantially better. Therefore, I have come to the conclusion that DH should be for those who are prepared to commit to using standard staggered boards only, and that DHm is a better long-term choice for those who are at all "ortho-curious".

On to the board itself. It was tricky to get used to initially. The inner keys (middle columns) caused me to make errors, the new locations being somewhat lower. I had kind of expected that though. But another thing I didn't expect so much, was the left-hand upper row: I would sometimes type F instead of P etc. Although the top row stagger is normally only ¼ key, the difference seems to be exacerbated by the Atreus's angle. Still, I was able to overcome this with a bit of practise.

My next issue is the bottom (modifier) row. Having lots of thumb keys is great, but I find that their small size and concave profile are not particularly well suited to thumbs. This has turned out to be my biggest issue with it. Definitely my Ergo Pro is still the winner in that department, its two short but chunky spacebars are the still best design I'm aware of.

I haven't missed having number keys, using numpad layer works perfectly well as I'd expect. But I would prefer an extra column of keys on each side. Although such keys should be used sparingly, they are convenient for certain rarer functions.

Despite the tricky initial adjustment, it's a decent keyboard. Very portable, comfortable to type on (thumbs not so much), and the simple symmetrical design looks attractive. And that fact that's it's programmable with layers means it's very handy for those situations where I need to type on other equipment but without having to install or configure anything. All the goodness of DH + Extend + Symbols layer in a conveniently small package.

I'm not sure I want to commit to using it as my main board exclusively though, so the question remains of how easy it would be to frequently switch between using this board and a traditionally staggered one.

Another minor issue is the number of keys moved from standard Colemak, where DHm has that one key advantage. For most users that won't matter but for us designers it's worth mentioning. On the other hand, a very slight niceness I discovered with Colemak-CAW was that the V and M keys stay in place from QWERTY – I've actually used that for navigation sometimes.

If we were to cut down to one variant after all, we'd probably need to use a different name for it though. Calling DHm DH henceforth would be too confusing since it's been something else for more than two years, but calling it DHm if we decide to abandon the currrent DH standard is extraneous. Of course, we could just call it Colemak-Curl(DH) but I doubt you'd like that... :-) We could of course call the current DH DHk in analogy with DHm, but I'm not sure that'd actually improve the situation?

I only say that because I think on a staggered board, the middle-row centre and bottom row diagonal aren't hugely different in quality. But of course that is subjective so YMMV. Yeah, having two variants is annoying but I guess they're here to stay now. When we agreed on the MK switch, I imagined most users would be using the new DH on staggered boards; as it turns out there has been more interest in DHm on ergo boards than I would have anticipated. I also didn't expect to be trying out ergo boards myself eventually. With the benefit of hindsight, I should have just remained on the original DH.

Agree the DHm naming is also not ideal. It does make it sound like a bigger change, but of course it's closer to vanilla Colemak. I have also previously thought about calling the newer variant DHk. If anything the original should have kept the name "DH" and the newer one called "DHk", since it moves the K additionally!

Given where we are though, I guess DHm and DHk at least offers some sort of naming consistency, but I'm also wary of more nomenclature changes as I think people have gotten used to the current names.

Not sure they're here to stay. If you and I decide to push one forward and the other into the undergrowth, it'll have an effect. My old variant is hardly remembered at all anymore...  ¯\_(ツ)_/¯

Actually, there was this one user at the Discord who came up with that one a week or two ago! Mostly out of a desire to keep ZXCV together I think.

Could always take a leaf out of Coca-Cola's book, and bring back the original variant as "DH Classic".

The LK bigram is a bit klumsy on Colemak-CDH. But it's mostly a matter of learning the alt-fingering anew. I already alt-fingered the important NK/KN bigram which is now NM/MN as well as NM/MN which is now NK/KN, and sometimes the LM/ML which is now LK/KL too. So it's not all that bad, just unfamiliar.

[Hehe, just realized that the LK bigram is the same as it is on vanilla Colemak. So it's certainly not a biggie!]

I've been thinking more about this having a single variant thing over last couple of days.

I've come to the conclusion that it's a good idea. Weighing up the advantages and disadvantages:

+ Easier to maintain a single variant
+ Avoids the confusion over DH/DHm terminology among newcomers
+ No need to force people to pick between staggered and ortho version based on anticipated need.
+ People may start with DH on a staggered board, and then, as they get further sucked in to mech keyboard scene, end up with a ergo board. The current situation makes life difficult for those people. We are forcing them to go through the MK dilemma I went through at the top of this topic. By having a single layout that is basically the same for all keyboards, the migration path between keyboard types is smooth.

- DHm is perhaps slightly worse for standard staggered boards (but only very slightly).
- People who are using K in the middle currently either have to change their layout or use an "unofficial" DHk variant.
- Maybe some slightly worse bigrams, e.g. LK, but as discussed on Discord, turns out to be not much of an issue.
- For people who switch keys around where possible due to row profiles, M and K are on different rows to Qwerty - meaning two extra blanks are needed.
- Changes. I am generally resistant to making changes to things are "out there" in the public sphere and already being used. However, in this case, there is precedent, and we'd only be returning to the original 2014-2017 situation.

All things considered, I think in this case the upsides outweigh the downsides by a big enough margin to make it worthwhile.

I'm still in the testing phase myself. But I'm leaning toward the same conclusion. Of course, that will mean extra work for both of us on our pages and implementations, but after that we'll have a smoother ride.  (✿◠‿◠)

I don't suppose we'll manage to agree on the number row split of the Wide mod though? Keeping 6 on the left hand is a ≈1/2u shorter stretch on a row-staggered board, but for split matrix boards the 6 key seems to nearly always go to the right. For split boards in general it seems to me that most row-staggered ones have 6 on the left hand and most matrix ones have it on the right hand. So maybe we're still stuck with two variants there.

I do wish that we'd both agree to follow the convention of showing 6 on the left hand for row-staggered Wide and on the right hand for matrix Wide, is that an option? I'll have to check how I've done it, I don't have a lot of matrix images around but I do have an EPKL implementation for matrix boards.

don't suppose we'll manage to agree on the number row split of the Wide mod though?

It's funny you should say that, I was doing some work regenerating the images earlier today for M in the middle, and I did indeed set 6 on the left!  That discrepancy was accidental I think, I have no preference either way, so it's a good opportunity to get consistency there too this time.